Yet another OHRRPGCE dev blog

Something else: I am unable to remember if F2 or F3 was quicksave or quickload. Call me stupid, but it's the truth. Whenever I want to use these keys, there is a 50% chance of overwriting the quicksaved game that shouldn't be overwritten. Taking into consideration, that you mistype sometimes, that raises the danger of falsely overwriting the quicksave to about 52%!
So could there be a question: "Quicksave the game?"
­TMC
Metal King Slime

I often mix up quicksave/quickload too. OK, I added a prompt (I don't think it's annoying) and I also got rid of the screen fade in/out when quickloading, which was annoying (it originally didn't do that).

I really really needed a real usb keyboard anyway because the adaptor forgets about held-down keys when pressing other keys, especially when holding capslock (which I have mapped to ctrl since I'm an emacs user). I'm more productive now that I can use capslock again! YAY CAPSLOCK
­TMC
Metal King Slime

I spent some time on spriteset resizing. Somehow it's far more work than expected. A lot of the problems are due to drawing the preview using slices instead of just drawing it directly, which is often simpler (in FreeBasic code).

Didn't quite finish that before focusing on getting Mac builds working. I finally gave in and set up Mac OSX in a VM as I couldn't avoid it, which cost a few long days. But 32-bit builds I compile myself crash immediately, it looks like they're being mis-linked. And 64-bit gfx_sdl2 builds don't work either, they show a blank window, although I saw that problem already months ago when testing on a Mac.
After all that effort setting up the VM... I still have no clue why 32-bit Mac nightly builds aren't working.
However, I did manage to get 64-bit Mac nightlies working! http://hamsterrepublic.com/ohrrpgce/nightly/OHRRPGCE-wip-x86_64.dmg

Totally fed up with this release delay but I'm also finding an unlimited supply of relatively small fixes to make, although they don't appear on the todo list.

For example imagine my horror when seeing what the map browser, file browsers, backdrop browser, and minimaps look like on Mac: 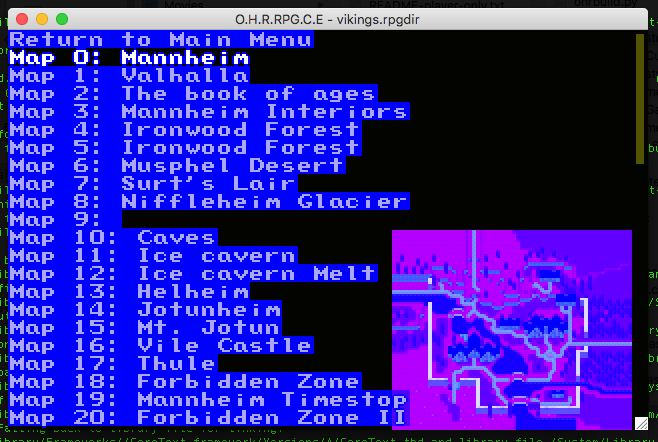 It's not just me; noone reported this. Someone even claimed they thought it was meant to look like that

Phew, at last all Mac problems holding up Fufluns are fixed. Mac builds are all working, we have separate and complete 32-bit and 64-bit Mac apps, and the garbled colours are fixed. (The experimental Mac SDL2 build just shows a blank screen, but I'll investigate that some other time... it used to work though!)

What really derailed my estimate of how much work this would be was that the actual resizing only took 4 lines of code, but the menu took 150 and was blocked by several bugs elsewhere.

Finished up user interface changes to the spriteset editor and thingbrowser ("Thingbrowsers" are the graphical browsers for items, heroes, enemies, textboxes, etc.). Their wonkiness has been annoying me a lot!

-Copy-pasting whole spritesets works properly now; the spriteset will be resized
-You can now copy-paste between different spriteset types again (like in Etheldreme)
-You can scroll to the right to view large spritesets (in future I'll squash large spritesets instead)
-Added "Add new thing" button to the bottom of every thingbrowser so you can press End then Enter, like other editors
-Left and right keys always go to previous/next thing/frame, and wrap around the end of the row
-Wrap around from top to bottom/vice versa
-Hold Shift in spriteset editor to move by spriteset instead of frame
-Many many other tweaks and fixes that took days

Added Ctrl-F8 debug key (works everywhere in Game/Custom) to view the debug log. And if you press F9 in Custom or F8 in Game you'll see the number of errors in the log.

Added "scroll to slice" as alias for "scroll to child" and gave it a new arg, "apply padding", which I needed to get the spriteset editor to display. It's false by default
­TMC
Metal King Slime

Probably everyone will be happy that Game spawned from Custom no longer asks to save when Custom quits.
Should I also get rid of the prompt when you quit Custom warning that a Test Game is still running? Maybe as a disabled-by-default ohrrpgce_config.ini option.

TMC wrote:
Should I also get rid of the prompt when you quit Custom warning that a Test Game is still running?

That doesn't really make a difference. I'd keep it for those who didn't read the bottom line in Custom.exe, that F1 can be used for some help texts.

I found something else, that might be worth a look. When quicksaving a game while the hero is walking, the hero gets misaligned with the tiles, when loading the game.
­TMC
Metal King Slime

Yes, that prompt doesn't seem to matter much.

I also noticed that quickloading problem when I tested it after making that recent change.

for the last few days I've been working on optimisations, especially to our most low-level I/O code (it's so low-level, it even inserts itself underneath FreeBasic's library routines), to speed up the graphical browsers. I've managed speedups of 20x in some cases.
­TMC
Metal King Slime

I've been doing a loooot of optimisation of the thingbrowsers and spriteset browsers (top-level menus) and managed to get speedups of up to 35 times -- make that 50 times when I merge in some more changes soon! (See link above.) Unless your game is called Adventures of Powerstick Man or your computer is from the wrong century, all menus should now load close to instantly. Viewing walkabouts in Powerstick Man used to take over 17 seconds here on Windows XP!!

The obsolete graphics lumps will now be deleted when you edit a game, so you will see the size of your game shrink potentially by several MB. The graphics have been duplicated since two years ago. (The new graphics lumps are the same size as the old ones)

And fixed the last Fufluns release blocker: badly written virus scanners could cause data loss by interfering with Custom's ability to rename lumps.

You know what that means??


*We've switched to github for bug tracking, but old bugs haven't been migrated yet, hence starting from 1 again.

Quote:
I've been doing a loooot of optimisation of the thingbrowsers and spriteset browsers (top-level menus) and managed to get speedups of up to 35 times -- make that 50 times when I merge in some more changes soon! (See link above.) Unless your game is called Adventures of Powerstick Man or your computer is from the wrong century, all menus should now load close to instantly. Viewing walkabouts in Powerstick Man used to take over 17 seconds here on Windows XP!!


Congrats to everyone else. ;) Place Obligatory Signature Here

TMC! This is fantastic! Before christmas, it took 125 seconds to load the 1181 walkabout sprites in The Adventures of Powerstick Man, now it only takes 4 seconds on the Win95 Celeron 400 from the wrong century. Well done! Also on the Map browsing screen, there is some intelligent loading now!

However the autobackups could kill the hard drives. Could there be an option to switch them off? So many programs leave heaps of data junk behind them nowadays... there were also problems with remains of crashed attempts. If one forgets to delete them, when Custom asks to clean up temp files, then the starting time is affected very badly. It took up to 20 seconds to start Custom after editing Powerstick Man crashed. However after the temp files were gone, everything was fine again.

Further tries on the text search crashes that only exist on Win95, showed strange, but reproducable behaviour. Might has something to do with the amout of text boxes, that custom has to shuffle through? When I search for something that is at text box 62 (in my game for example), it usually crashes. However when I go to a text box between 30 and 61, it wouldn't crash. But the search starts before text box 30, it would crash. However, on other places it manages to jump more than 100 text boxes, so it can't be all about the number of text boxes in between search results.
Also some crashes occur, when the text search is used too quickly. Win95 seems to be a bad operating system... nothing of that bothered the text search in the 2013 OHR version by the way.

What do you think about that In-App Purchases menu? It says, that it is experimental. So is it ready to be shown for the next release? Maybe the settings screen would look better, if it's hidden.

You can remove the purchases menu in the menu editor. Also, maybe I remember incorrectly, but I thought it wasn't supposed to be visible unless at least one purchase is defined (if that's not the case , I'll add to my list of things to fix)
­TMC
Metal King Slime

Oh, sorry, I'd forgotten about that textbox search crash on Win 95, although I did write it down. There's actually quite a large list of unfixed bugs, but we couldn't let that hold up release any longer. I won't get to that bug before the release, but I'll try to take a look soon. Thanks for the further details.

20 seconds to scan a crashed working.tmp directory? Wow. I just tried it in my WinXP VM and sure enough, it took several seconds to start. It checks the last-modified time of every file in the directory, but I thought that that would be very fast. I can't think of anything else that might be the cause though.

Sure, we can add config settings to disable or reduce the number of autobackups. I do think the number per game (10) is excessive. I think it's that high just to ensure there's a backup at least 10 days old.


Quote:
You can remove the purchases menu in the menu editor.


Bird mentioned hiding the In-App Purchases menu from the "settings screen", not the in-game main menu.
"In-App Purchases... (experimental)" was added to the General Game Settings menu about a year ago. Before that, it was a submenu of "Platform-specific options" (now renamed "Platform-Specific Controls"), and has actually existed since 2013. So we won't hide it now.
(I notice it was never mentioned in whatsnew.txt)

Pepsi Ranger wrote:
Congrats to everyone else. ;)

I'd like to hear what your actual experience is in trying to edit powerxe.rpg in Fufluns, since noone else needs to do so. (Though entering the Attacks and Enemies editors was slower in Vikings than in powerxe.)

TMC wrote:
I'd like to hear what your actual experience is in trying to edit powerxe.rpg in Fufluns, since noone else needs to do so. (Though entering the Attacks and Enemies editors was slower in Vikings than in powerxe.)


That should work because I was hoping to get back to it for a bit after Fufluns releases. I have some design choices I want to try out that Fufluns will make easier. Place Obligatory Signature Here