Hmm. It's fine except for the way it just suddenly teleports into your way. I think if it slide down when you approached it would look better.

I actually agree with the sliding down affect.
However, the sliding down function looked almost the same due to the speed I wanted it sliding at and there were clipping issue, namely when the invis would run out while you were standing under the block.
Mainly, for functionally I wanted it very clear this wasn't a timed door that could be bypassed in any way other than invisibility.

I'll likely end up setting it up where the block itself is merely for show and the wallmaps is altered separately.
I was just discouraged by this originally because the original script had a ton of bugs and I got too lazy to rescript the pixel by pixel movement of the block.
Now that the base is working perfectly, I'll likely end up adding in the small detail of movement.

What if you drew a two-block tall version of the block with massive motion-blur, and showed it for just a single tick.

Then it would go just as fast as you want it too, but the motion blur would make it look like it was moving. 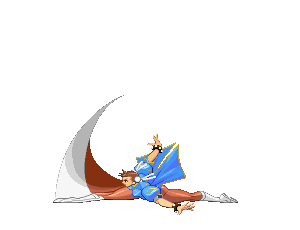 You know, like that, except with a block instead of a leg ;)

I am really excited about Tim-Tim 2.

Yesterday I came into the living room, and my daughter had found her way into Tim-Tim 1 on my OUYA. She played for almost half-an-hour. She had a hard time with the precision jumping, and she never made it to Steve, but she kept saying "This is hard.... but this game is pretty good". (Plus things like "Sneaky bats!" "I'll get you, slime!")

I am really looking forward to playing Tim-Tim 2 with her.

That warmed my heart. Sneaky bats indeed.
hopefully she doesn't find the jumping to be as hard in this new one.
Worked really hard on that.

Yea a blur affect had crossed my mind. Just not sure it would blend well with the rest of the game.
What I might end up doing is having 2 in between steps where the block is a little over a quarter of the way, then a little under 3 quarters then complete.

Just to see how it would look, I tried editing a motion blur into your animating gif. It would probably look even better with an upside-down blur when it goes back up

Here is the block I used:

Also, I really hope the block coming down has a cool satisfying "shlunk" sound effect :)

dangit... i like that a lot.
Would be pretty easy to implement too...
might need to use this idea

That motion-blur is a good effect. It looks neat.
You could also use another idea perhaps, like a lightning/force-field from the block, or something fancy, like the eye lights up and something rises from the ground to block the player etc., or maybe something really fancy, like changing depending on how far the player is from it. I like the idea of the seeing-eye-block anyways, I think it is a good design solution!

I really like the look of Tim-Tim. At first I wasn't sure, but the level/enemy design and animations look really nice, and it looks, frankly, beautiful and inspiring.
I look forward to its release.

No magic can't be modified.
Dear god you have high expectation...

Thank you for the kind words though, I live for that stuff.

Sorry haha. I'm used to nethack where you can easily kill yourself by accident :p

heh, no it's fine.
Honestly doing something like combining magic would be neat, but I don't think I'll do that this game. I already have too much planned out to add something that big.

I didn't mean "combined" per-se.
More like if an enemy (or the player) can nullify, or reflect an attack, or your own twister can push/harm you if you move into its path, or something like that.
I was imagining the player would need to be careful casting certain spells in a tight spot, or around certain enemies/objects.

actually for a time some of your attacks could hurt you
I took that out though as I personally was finding it annoying and it basically never got good comments.
The item was the alchemist fire. The jar breaks and bursts into flames. Originally the fire could hurt you. This made snagging on a corner not only upsetting because you wasted an alchemist fire, but doubly so because you hurt yourself a bunch too.

The spell that really put an end to it was the tornado spell though. I couldn't make it appear far enough away to not hurt you, while still making it aimable and make sense that it was shooting from you. I was planning up a whole animation where the tornado would appear, then I made the animate damage enemies. And as I did all that I just thought... what am I actually gaining from making the spells hurt you? Who actually wants this?
So now none of your attacks can hurt you.

That sounds quite wise!
edit: didn't mean to clutter your thread either. sorry.

Spoonweaver wrote:
And as I did all that I just thought... what am I actually gaining from making the spells hurt you? Who actually wants this?

That's really insightful. I feel like designers in general need to ask themselves that question more often. At least amateur ones (who, incidentally, are the designers I've interacted with). That's really cool though, that you were able to look at the game and make it more enjoyable by removing something unnecessary. Ps. I love my wife
­TMC
Metal King Slime

Yes, I had this desire to create games which pushed the envelope for realism and complexity, which in hindsight was just simply bad and misguided. The actual benefits of realism and complexity are immersiveness, depth and emergence of gameplay, and intuitive mechanics, but those are best achieved in other ways.

That block looks even better with the more obvious blur effect, versus how James drew it.