Day 19:
Lua is a weird language in that there are so many alternative ways to accomplish anything. Spent some time changing the structure of the code a little to decrease verbosity, and rewrote the text markup-parsing, while deveah wrote a nice map generator in next to no time and started on items.

Day 20:
I wasted a heap of time deciding on code architecture for items while deveah improved maps.

Day 22:
My attempt to implement OO-style inheritance for item definitions was disasterous; took a long time to figure out what was wrong. Also some debugging helper code.

Day 24-26:
I really have no ability to prioritise anything; I've spent days trying to improve ncurses' handling of the numpad with all kinds of arcane escape code overrides and magic sequences to put xterm in vt220 emulation mode. I already knew I hated curses, now I also know it's pretty broken in practice. Who wrote these broken termcaps?

Day 25:
Handed in my formal letter of resignation to Ichiro; who responded cordially.
Haven't done anything since day 10; he at least created a few placeholders in that time. I'm still curious to know what the game would have turned out as if we'd actually tried to make it, but judging from the fates of my previous projects I'm unlikely to revisit this one.
Last edited by TMC on Tue Jul 14, 2015 7:53 am, edited 1 time in total.
Top

Beyond a few more npc walkabouts and some more attack graphics (which I'll probably just take from harpy game at this point) I'm considering my work pretty much done. The ball's in spoon's court now.
Top

Day (What Day Is This I Haven't Been Keeping Track)

After almost a week of doing nothing but occasional playtesting over and over (this is kinda fun!) I found a single-line fix for the performance problems in the tile merge script-- why was I bothering to sort all those slices? For the almost imperceptible control over which overlapped which when they move? That was a cosmetic thing that was only visible for a tiny fraction of a second. Definitely not worth the slowdown.

Giz continues to bask in the contented glory of the great sprites he sent me last week.
Top

This is the entry from phoenix and I

I'm responsible for the overwhelming majority of the graphics, Spoon's responsible for most everything else. Not sure if that's the best split of responsibilities, but eh, what's done is done.
Which is probably why I'm going to steal the graphics for my own rest-of-summer project.
Top

Oh! Dang! The deadline was yesterday? Here I am loafing around. I'll have something posted today.
Top

Considering right now the only entry is Phoenix and I's the contest is basically delayed until at least one other entry is entered.
Top

It doesn't have music and sound. I wanted them, but I figured since the deadline was yesterday, I probably should not dally any longer.

I would be happy about waiting for the other teams to check in before we call this thing closed.
Top

Bob the Hamster wrote:It doesn't have music and sound. I wanted them, but I figured since the deadline was yesterday, I probably should not dally any longer.

Why not just use that random music track generator? Those are always pretty solid and versatile

My pronouns are they/them
Ps. I love my wife
Top

James, I love your game.
It seems like I'm not suppose to be feeding the devs, but that's what I was doing.
I always find your games highly developed.
Where DO you get the time.
Top

I just squeeze game making time in as often as I can. It helps that slice collections make stuff easy to script. I was able to throw together the title screen and the tutorial in a surprisingly short amount of time this morning.

that's my experience too, but I feel like I'm getting better at using the butter and syrup defensively against those free-loading sons of guns.

I released a small new update to Devs Like Waffles.

Now it has music & sound effects, and you can skip the Intro/Tutorial after you have viewed it once.

I also slightly reduced the rate that new rows push up from the bottom from once every 8 turns to once every 10 turns. (does not apply to old saves)
Top

If I'm not mistaken, you also added/improved the butter/syrup particles! Very nice, my voice has ot the suitable amount of soul!
Top

Wow, this game is fantastic, very addictive. I have no idea what developments there have been in falling block games since Tetris, but this one seems quite original? The complex mechanics make it totally nonobvious what strategy to use, and there are probably a lot of different ones which are viable. When it comes to surviving for the longest time it seems like it's best to have your devs at the top so that they can chew through the landscape, but surviving is completely different to serving customers. My attempts to entomb them in waffles and then create complete rows usually ended in disaster, even though in theory it seems it should be easy without the devs in the way. But those pesky devs have a habit of randomly eating unfinished waffles at the worst possible place, causing a column to fall, opening gaps and ruining my plans. I have no idea what the trigger for that is. Maybe if they're hungry because they haven't eaten enough waffles?
I often got really unlucky with the ratios of the different ingredients being far from even, so it would be nice if some evenness were guaranteed (waffles should be less common of course, because they spawn from the bottom).
My record so far is 106 waffles eaten by devs, and only ~10 served to customers. I really wish that the game tracked high scores, or at least showed your score after you get a gameover.

There are of course various glitches with the devs either ending up behind a waffle (or maybe stacked on top of each other?) as in the following screenshot 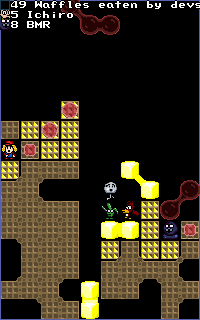 I don't know whether it was intentional that waffles can fall through devs, which turns out to have quite a big effect (they escape much more easily). Another bug (assumable): once I got a spatula as soon as I started the game.

And yes, those particles are nice touches, though it took me a long time to notice the shrink effect.

Check out this dev herding