How do I update dialogue through slice collection?

Sorry, I haven't been following this thread at all. It's not fun to jump into a long confusing thread, and it's much harder to explain how to write and debug scripts like these than to write them!

trunkmenu isn't the script with the infinite loop, that's test11. Could you post test11?


If I remember correctly from what I learnt: you can't run a script which is itself inside a script...
except for a automnumber.

You can't run a subscript from another script or from an event in Custom.
"define script(autonumber, ...)" is obsolete, you can just remove any autonumber line like that.

This is a strange thing to write; I think you meant

which behaves almost identically. But you can write that even simpler as

Thnaks for all your remaks TMC! Here my script test11.

With the version of the code above, I've got the message " A script may be stuck in
an infinite loop. Press F1 for help." I've given the script to a npc (it is launched when I speak
to the npc) and no other script or menu is launched.

Some other message may appear after, but for the moment but beeing stuck in a "while loop"
seems to be main problem right wow!

Anyway, as always thanks in advance for your remarks and piece of advice!
Last edited by bis_senchi on Wed Apr 07, 2021 8:55 am, edited 1 time in total.
Top

You need a "wait(1)" that is inside the while but outside the if.

That is what causes the infinite loop.
Top

Thanks a lot James!. The while loop was suck indeed because of a missing wait (1)


So now the script has no errors and launch correcty.

The only problem left is cursor movement and detection. 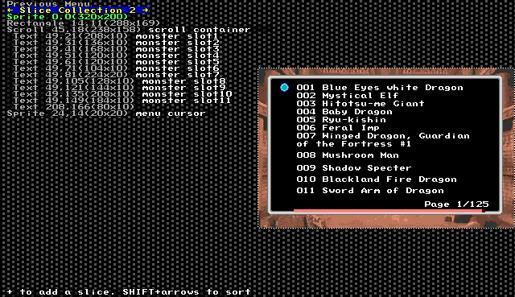 Odd, I thought there was a version of the script earlier in this thread with the up/down keys, but I don't see it.

Don't add "wait for key(any key)". It's not necessary if using "keypress" instead of "key is pressed".

What do you want left/right to do? Same as up/down?
Of course, usekey is already handled in trunkmenu.

As for the monster selection menu, just copy in the same code from trunkmenu for moving the cursor into that script. The difference is that instead of a slice with the "menu items" lookup code I see it has the "scroll container" lookup code.

You shouldn't need this check for Space at all, because there's a "wait for textbox" immediately before the break
Last edited by TMC on Thu Apr 08, 2021 11:23 am, edited 1 time in total.
Top

Problem with posting on the forum

Sorry There seems to have problems when I save my message. I'll edit this one when
this problem will be solve. 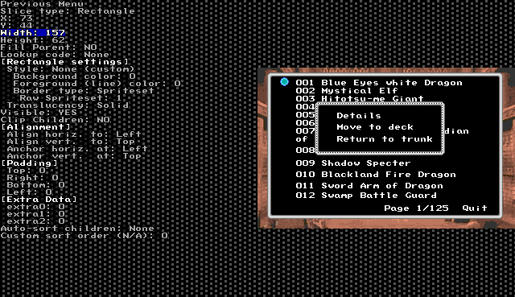 It's a bit different from the gameplay in the original game but game engine and game limitation
are different, so I need to make some adjustement As you can see in the original game the previous screen is blured to focus on current selection.
Do you know if we can do that by using look up slice manipulation ?

What do you want left/right to do? Same as up/down?

Well what I want for the arrow keys up/down/right/left is to do what you made them do
indicate current selection on the menu and also in the sub menu I've added above when it is opened.

You also asked about keys


You're using Space to leave the menu? That's quite odd. Make sure your "if(key is pressed(key: space))" appears before "if(keypress(use key))".

As it is now I'll use the key space place on "quit" to lave the menu. May be later I'll come back to the code and change by a indication press esc to leave.
Gameplay is not fix on that particular point.

Re: Problem with posting on the forum

bis_senchi wrote:As you can see in the original game the previous screen is blured to focus on current selection.
Do you know if we can do that by using look up slice manipulation ?

Yes, this (darkening the background, not blurring it) is easy. In the slice collection for the bottom (trrunk?) menu create a black rect slice which covers the screen, above the menu, then set it to "Translucency: Blend" and Opacity about 50%. This will darken everything behind it. Then give it a lookup code (e.g. "darken rect") and set it to "Visible: No".
Then use

to turn it on.

If you use ui:SelectedItem then the colour will flash between the two selection colours automatically!
Last edited by TMC on Sun Apr 11, 2021 4:50 am, edited 2 times in total.
Top

As always thanks for your help:

Script debugger said that slice child is invalid slice handle and that set text color is also a
invalid.

As it is, nothing still happens when I press arrows. The text is also not selected.
Anyways, It's already a good thing that by using slice look up I can get the same effet when
the sub menu is opened.

Now that I think about it "selection" is not defined as a local variable but global... that may be where the problem comes from.

You need to put the code for moving the selection cursor inside the while loop!

Yes, 'selection' should be a local variable.

I made these fixes and also another bug and cleaned up the script for you:

Advice about look up codes

So I've tested the script and the problems are still there.

It's as if there are no error messages the command set text color (and may be also key press)
wouldn't function properly.
I've made a test with show value and place it after set text color and it appeared on screen which means that the script reads correctly at leat until that point....
After some search the problem is simply that my rectangle in my slice tree doesn't have a look up code Sorry

Just like with the previous menu, I should use the look up "items menu" isn't it?

As always thanks for your help!
Top

Oh, yes, I warned that the script didn't do anything with the cursor.
Just add the following line above the wait(1). I copied this line from the version of the script posted earlier in this thread. Once you had a working menu script you should have just made a copy of it for the second menu, instead of writing a new one.

I see SwordPlay wrote a post about how to position the cursor, on the previous page of this thread.

I've added the and still nothing happens

The text which is the monster's name is not selected either....
That has to do with look up code in my slice tree. Where should I place
menu items?

Is there another slice up code which I should check?

As always thanks for in advance for your help!
Top

I tested out the script myself and found that there was a problem because I made the "menu items" slice a grid slice. To fix that, I had to change the line to move the cursor to

Then the position of the cursor in the slice collection doesn't matter.

The slice with the "menu items" lookup can be anywhere in the tree as long as its children are (only) the menu item slices. The cursor must not be a child of it.

Thanks for all your remarks as always TMC. Here is the script as it is:

I didn't create a script show monster like in your version of the script, because this line will be change when I want to include the sub menu. When a a player access a card in the trunk menu he/she can 1- send it to the deck 2-see the details (get all infos about the monster & card use) 3- return to the previous menu (see my post of April 9th to see what I'm talking about) 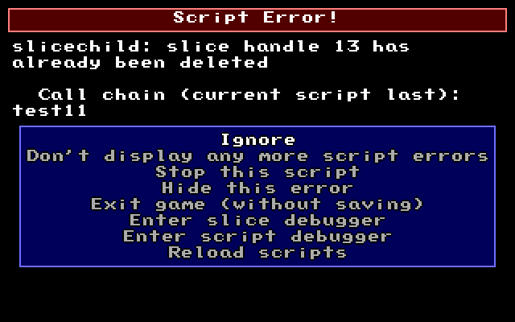 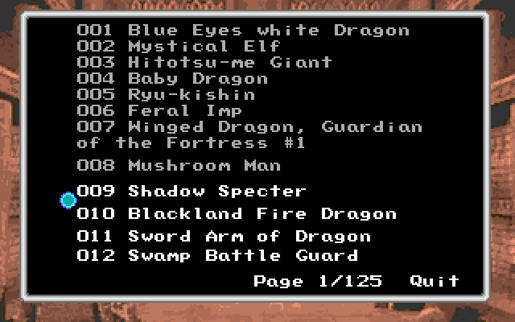 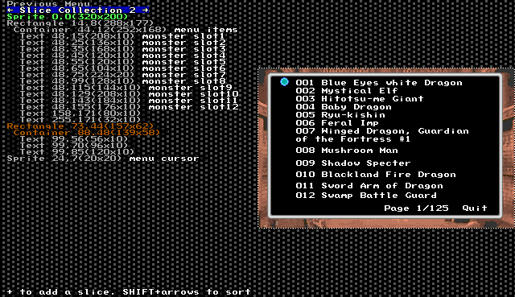 As you can see there is still an error message... and when I move the cursor the grey selection does not back to white... I need to think of a way to "record" the previous position so that the
set text color works efficiently...

I didn't (yet) use a grid. Could you please explain why using a grid would help to put the cursor in screen correctly? Anyway feel free to reply with all king of pieces of advice.

You added the line "selected slice := slice child (sli: menu items, selection)" near the top of the script. It's throwing the error message. That's incorrect, the first argument to "slice child" is a slice handle, not a sli:... lookup code. Delete it; it's not needed (because I wrote "if (selected slice)" later in the script).

In the default palette colour 7 is grey and 15 is white, so you probably want the first line to use colour 15 and the second to be something else.

A grid slice isn't needed, it's only useful for evenly spacing a lot of slices. But in this case one of your menu items is two lines high, so you can't use a grid slice anyway.
Top
Post Reply
75 posts