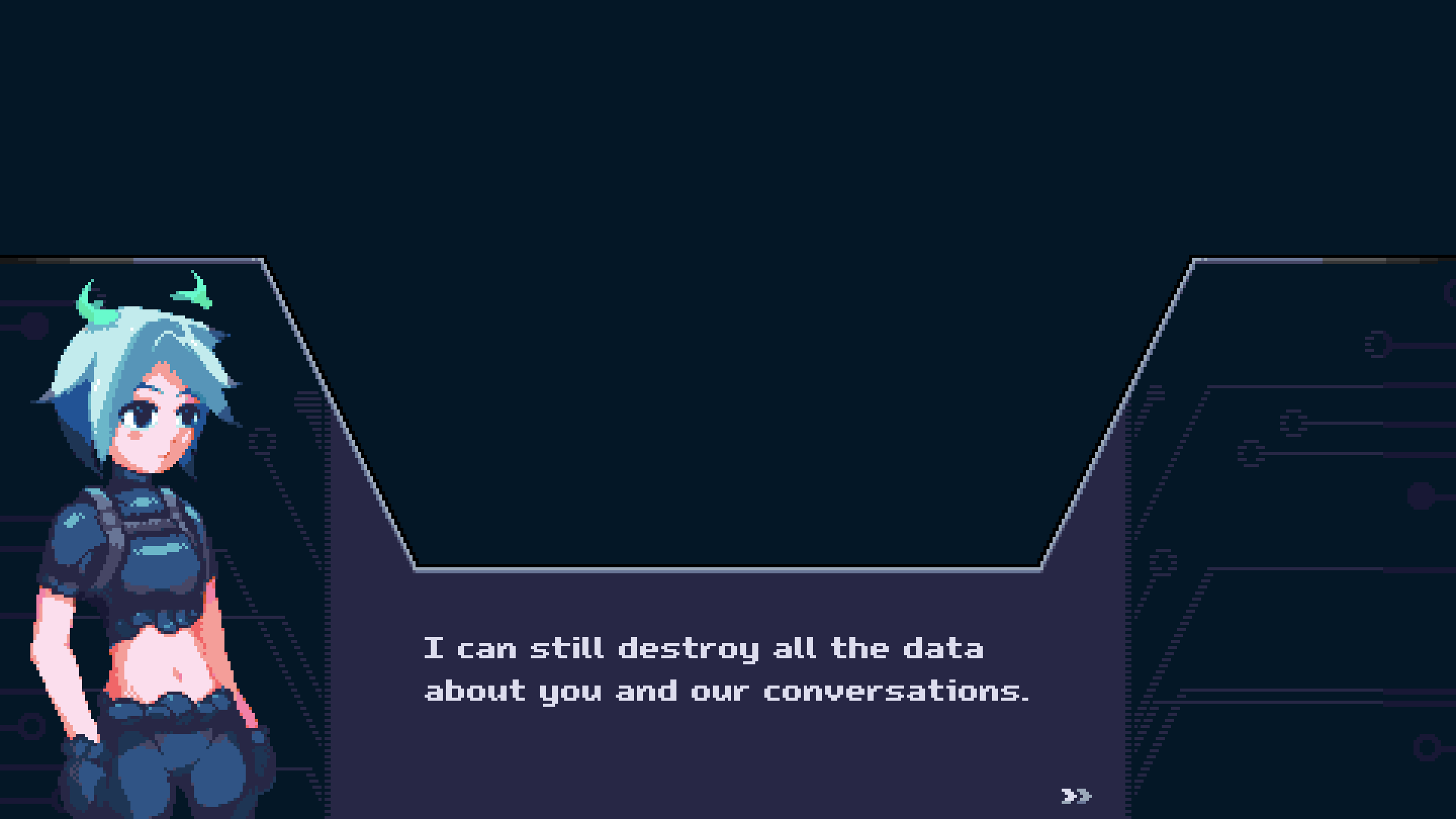 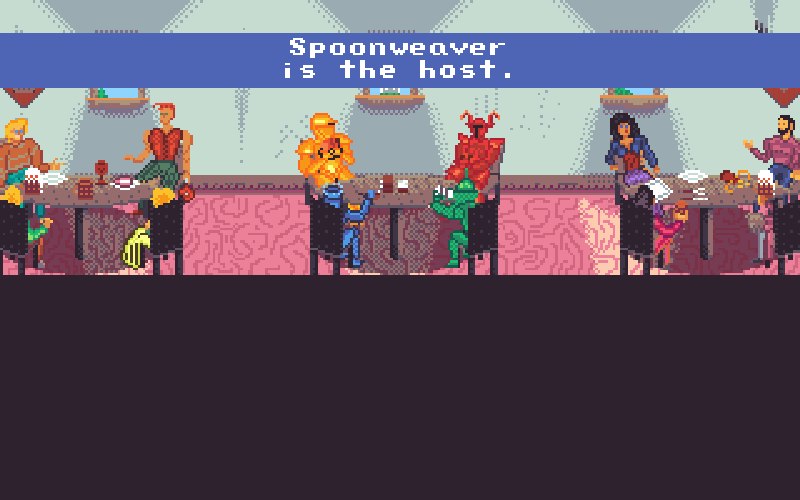 Team 3's game is called Knight Slights. It's a card game for mature audiences, intended to be played by knights. I can't really divulge more than that without totally giving it all away. Morpheus did a spectacular job with capturing the feeling of Monkey Island's sprites I thought! The game has a lot of personality. Check out Red Triangle Games!

Yoooo loook at all of them sit there!
Can sense a huge banger from that one already XD eight days a week

Happy to report Team 3 has finished our game! It is intended for gamers 17+ though, following the same guidelines that Cards Against Humanity did for it's age ratings.

Pri posted our submission (the real one this time) to the games list. Here's a link
https://www.slimesalad.com/forum/viewgame.php?p=139860 My pronouns are they/them
Ps. I love my wife

First Eeeethical Hacking. I beat the 4-mission demo. It's obviously an Idontknow game, and a very notable game.
When I fought my first battle and the enemy attack was animated it felt perfectly normal. Wait, what just happened? Had to stop and think about that.
I was impressed that every single enemy (except the popups, mostly) was animated, often with multiple animations. Especially well done are the ones that animate as they lunge at you.
The game does feel like a contest game though: pretty empty with few points of interest on the maps, relying on the story and battles instead, which is OK. The story did pick up but to begin with the intentional banality didn't hook me. But missions are short so you get the story at a fast pace, that's good.
With limited SP (see below) I didn't manage to figure out much strategy to using the skills, aside from debuffing enemy attack. Don't know whether there were any element resists. Another missed opportunity is that there's no real character progression because you can get all upgrades after Mission 1.
The memory minigame felt like it could be improved by adding something to it, but I don't know what, or just better graphics, as shallow as that critique is. It became actually fun once the sequences got longer but was too easy at first.
The quicksaving is a nice touch, too.

Your Buttcoins$ broke the buy menu.

Oh thank goodness you haven't finished the game yet, that means there's still time to take into consideration my ~bug reports~!
It seems that the memory minigame doesn't actually require you to enter the correct code, skipping the last couple buttons doesn't matter.
E-drink is not usable! It's not even capitalised the same as other E-Stuff. That made SP/MP a scarce resource because the Absorb skill doesn't seem to do anything either! I never found an enemy it worked on.
Fire Storm doesn't attack all enemies as it says on the tin. It's not even optional spread.
Typos: Tommorrow; "get into computer" -> "get into computing"
There's something broken with the menu system. I think that if you're on the "Hacking/Shopping/etc" menu and select the Status submenu then go back to the first menu and pick Go Shopping it opens the Status menu again, and only sends you to the shops when you close that submenu, but without closing the toplevel menu. And then pressing Esc while inside the brings up the main menu instead of closing the menu.
'Back' option in Options menu doesn't work either.
Walking up a step after the cell door opens causes the scene to play again.
I had to fight only of the wandering Popups in the 4th mission twice to get it to disappear
I got some cool hacker shades. The Shades do nothing. I don't even look cool.
omgwtf I was veeeery slowly beaten to death by Astrogolfer stuck in an infinite attack loop! I don't know if this is intentional but it sure felt like it. Tried again and killed it without it using that attack at all. (Very amusing attack BTW.)
The computer terminal in the room with the astrogolfer can't be used. And there's a tilemap glitch too.

Judgement!
You may or may not have noticed I didn't actually say anywhere in the rules that we'd all be voting for the winner.
That's because I thought I'd do something completely differently.
This coming Summer Slam, we are going to have a panel of Judges determine the winner instead of the normal community voting we do.
So I have decided to have this contest judged by my 6 year old son.

Please file any complaints on this forum in the next few hours.

I played KnightSlights and Eeeethical Hacking, enjoyed both games a lot!

For KnightSlights - missed color-coded maturity in the beginning and assumed yellow is the Mild level as you'd think with Red being most severe, but its opposite actually

Ambience is outstanding and jokes are alsmost funny, animations are very simple but add great share of livelihood to the scene!

For Eeeethical Hacking - thank goodness the Run option deletes the enemy encounter from map - this is the only thing that helped me to complete the game actually ahah, OHR RPGs are always so hard on me, at least the battles are turn based which is neat.

Despite being simple in visual department ( btw battle animations are yes, ultimately wonderful innovation), few gentle touches like running green flash in online shop or Officer Tanuki with a small leaf in his head look nice and soundstrack is very fitting for the vibes. Lost it to God Hand doing the OK gesture XD eight days a week

Spoonweaver wrote:
So I have decided to have this contest judged by my 6 year old son.


I object! This is unfair favoritism towards the games that aren't Knight Slights, and that don't have a warning saying they're only for ages 17 and up!

In all seriousness, though, if I had a 6-year-old child, while I certainly wouldn't give them Knight Slights to play, it's not the kind of thing I'd be particularly worried about them seeing, because when I was that age, I had actually seen a lot of dirty jokes aimed at adults in movies and TV shows, even ones that were ostensibly for children (the 90s were a hell of a time to grow up, the like of which we'll never see again,) and I never really had any strong emotional reaction to those jokes one way or the other.Â  If you asked me what I thought of all the dirty jokes I'd seen at that age, I would have said "well, they're just stupid.Â  The point of all these jokes is always that the characters are saying something that sounds like it's about penises or being depressed, but they're really talking about something else.Â  What's so funny about penises and being depressed, anyway?"Â  And I turned out perfectly fine.Â  I grew up to be a perfectly normal, functional adult who wants to literally be an anthro leopard in real life, and who has episodes of frustration and obsessiveness triggered by things like not being able to finish editing an image on my computer because the power went out, or not being able to wear something warm and fuzzy around my arms, to the point where I can't think straight about anything besides those things.

If I had a child, I'd honestly worry a lot more about them seeing something like the dialogue in Digital Soul Data that talks about people's souls being enslaved inside a computer forever and not being able to do or think about anything besides what they have memories of doing in life, because that's the kind of idea that, at age 6, I'd see brought up in passing, in media that weren't even supposed to be taken seriously, and I couldn't help but imagine it so vividly that I'd have nightmares about it for weeks. "It was right through those trees; I'm not insane
That's where the fin tried to drag me in
Don't look at me, look at where I'm pointing
Close your eyes, see what I see, Canajoharie..."
-- They Might Be Giants

Oh
He's already played all 3 games.
But I, take this as 2 people against the idea of him judging the contest.
So I will add another 2 judges.
He will still be acting as 1 of the 3 judges.
I'll post his judging video shortly.
...right after getting 2 more judges.

I had an issue with this when he proposed it at first because I thought it'd be unfair to Knight Slights. I do not think Knight Slights is the type of game to win any contests and was probably only made to get Fenrir excited.

In an effort of fairness for all, I'd like to propose a compromise, and a a good segway to Summer Slam. What if Spoon, Lady Spoon, and Spoon Jr. all judged Spring Collab and averaged their scores together? There's only three games after all. Check out Red Triangle Games!