SUMMER SLAM - the next gen of ohr contest

SUMMER SLAM - the next gen of ohr contest 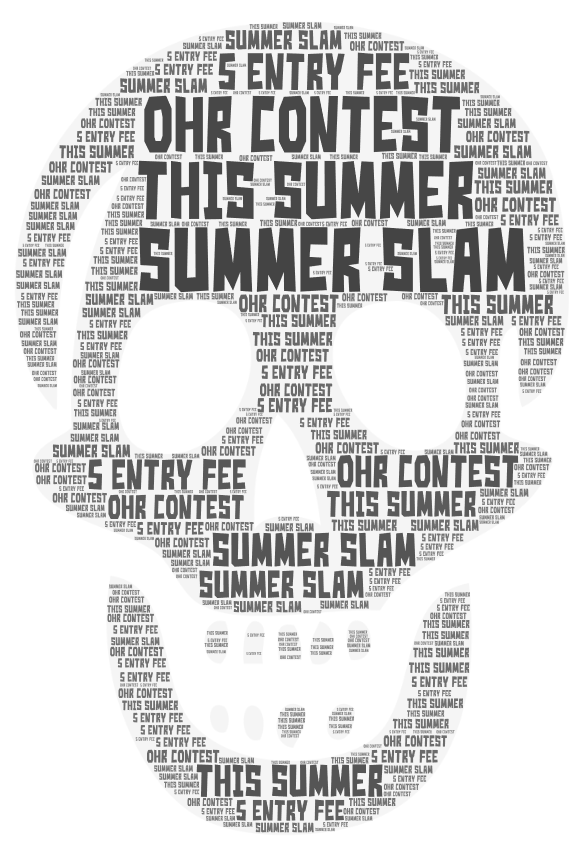 Spoonweaver and myself are co-hosting the Summer Slam! A completely different kind of OHR contest.

Participants are restricted from working on their Summer Slam entries until 6/21 as the night before we will spin two randomized wheels that will represent what all entries must contain. There will be a theme wheel (examples could be gnomes, birthday parties, post-apocalypse, etc.) and then a gimmick wheel (examples could be 8-bit colors only, 1 room only, etc.). Anyone can submit requests for the wheels as long as they are do-able. I have to emphasize that because Spoonweaver wanted a gimmick that said "must be made using your butt" and that just isn't realistic. There are no limitations or restrictions beyond the wheels.

As of now we've not formally asked them, but we would like to have guest judges for this and do away with community voting. We had a dream team list of them last night of James Paige, Nathan Karr and TMC. This is providing they want to do it, can judge all entries within a 2 week time period and are not entering themselves. Judges will get a special prize from Spoonweaver and myself that will be determined later.

You have between now and 6/21 to send in you $5 entry fee through paypal to: colesloth@gmail.com. Submit your ideas for themes and gimmicks you'd like to see on the wheels! If you enter Spoonweaver's Spring Collab contest, your entry fee is waived.

https://docs.google.com/spreadsheets/d/18cAnRncaP0M3yuwFmzdS6Fr-YgUdIES6MmXpnWR5jKU/edit?usp=sharing
Here's the contest Google Doc that details entrants/teams and the current options for the wheels.

Confirmed Judges: Baconlabs, TMC, MorpheusÂ­Kitami
JUDGE NOTE: Judges have the ability up to the date of the 20th, to veto 1 theme and 1 gimmick each.

The $5 entry fee covers an individual's or a team's game. Every entry to the contest must pay the entry fee, regardless of the size of the team.

If someone could also be so kind to sticky this thread. Check out Red Triangle Games!

I think I'll be pretty busy around that time, and might not be able to participate or judge-- but honestly I would be more interested in entering than in judging. I do prefer community voting myself.

I am also willing to "sponsor" a few entries, if anybody is uncomfortable with the entry fee (send me a DM)

Yea, I kept telling RMZ that he can't just nominate judges.
I don;t know what he was thinking.
But anyways, yea we were thinking of switching things up form the norm and having the contest be judged in some sort of new way. We seem to always go with community judging, might as well go a different route this 1 time. It'll make the contest different than what we are used to and hopefully add a bit of spice and fun to the community.

Spoonweaver wrote:
Yea, I kept telling RMZ that he can't just nominate judges.
I don;t know what he was thinking.
But anyways, yea we were thinking of switching things up form the norm and having the contest be judged in some sort of new way. We seem to always go with community judging, might as well go a different route this 1 time. It'll make the contest different than what we are used to and hopefully add a bit of spice and fun to the community.


You nominated some too Spoon! I just did it publicly.

We do have Baconlabs/achinlabs confirmed as one of the judges now. Check out Red Triangle Games!

WOW yet another chance to flex all over spoon and rmz? 3 weeks? i'll only need 3 minutes

Whose email is that and how exactly do we wire the ohrbets to it?

I'd like to see more gimmicks. Maybe ones that don't seem like handicaps? I don't want to make it any more uneven for you

Send your $5 to my email and I'll log it in the spreadsheet. Send via paypal to: colesloth@gmail.com

You are more than welcome to submit as many themes or gimmicks to add to the roulette wheel as you would like. Check out Red Triangle Games!

Re: SUMMER SLAM - the next gen of ohr contest

WHY IS THERE A SKULL. WHAT ARE YOU TRYING TO SAY?

Also i dont see spring collab mentioned anywhere... entry into that will count as an entry fee for summer slam, right? no "wall on one just one side" business
- Rav

You're right Sword. I updated my post to mention that the entry fee is waived if you participate in Spoon's contest. Check out Red Triangle Games!
­Eonhetwo
Red Slime

This sounds so fun! I was thinking maybe for a theme you can put "Educational" and perhaps a gimmick could be "Uses a map of the maximum size". Just spitballing though.

Edit
Oh! I thought of another gimmick. "All sounds are made with mouth noises." Just a vessel for dank memes

Eonhetwo wrote:
This sounds so fun! I was thinking maybe for a theme you can put "Educational" and perhaps a gimmick could be "Uses a map of the maximum size". Just spitballing though.

Edit
Oh! I thought of another gimmick. "All sounds are made with mouth noises."


Your two suggestions are in the spreadsheet! Thanks! Also welcome aboard TMC as our 2nd confirmed guest judge for the Summer Slam! Check out Red Triangle Games!
­TMC
Metal King Slime

Judging this contest is a good excuse for me not to enter it :)
I am going score the entries by applying an objective (or at least quantifiable) and arbitrary set of criteria, which will be drawn up ahead of the contest and kept secret. There will be points for general categories (such as (objectifiable) fun, amount of content, quality, immersiveness, etc), bonus points (e.g. "includes a complete set of X"), penalties (e.g. "I fast-forwarded", "Uses a map of the maximum size"). [I will try to ensure better games score higher.]

I'd like to suggest two gimmicks:
-no use of the colour green (or near greens such as yellow-green)
-no (images, descriptions or mentions of) plants

I'm probably not going to be able to enter this contest, but I still think I have a right to tell other people what to write about, so here are some more suggestions for the theme and gimmick wheels.

- Inflatable animal pool floats (it's thematic for summer, I say.)

- The opposite of the "limited number of colors" rules: you can use any number of colors, but all of your graphics must consist of characters from DOS code page 437, with each character drawn in a solid color.

- Your game must have multiple chapters with different physical scales: the first chapter could take place entirely within one house's yard and be about ants searching for food, the second chapter could be about the man who lives in that house searching the city for his wife who has mysteriously disappeared, and the third chapter could reveal that the city is part of a spacefaring civilization, and focus on astronauts on the frontier searching for the meaning of the universe. Or it could go the other way, from a large scale to a small scale.

- Anti-self-insertion: instead of doing the stereotypical newbie thing and putting yourself into the game as the protagonist, make a game about a character from somewhere else (an OHRRPGCE game, a movie, a real-life historical figure, whatever,) inserted into a situation you once faced in real life, and have the game be about how they'd respond to that situation. "It was right through those trees; I'm not insane
That's where the fin tried to drag me in
Don't look at me, look at where I'm pointing
Close your eyes, see what I see, Canajoharie..."
-- They Might Be Giants

I've been looking forward to this, and I settled on two ideas to pitch to the random wheel.
Theme: Mythology - Anything derivative of a real-world mythology, like Chinese, Aztec, Mesopotamian, Groman, etc. Doesn't have to be accurate, as long as it's fun. Everybody loves good old fashioned mythical beasties, heroes, and deities, right?
Gimmick: Randomization - Game must have some substantial element of randomness. Random encounters and combat rolls for accuracy, crits, and such don't count. Could be baked into the entire game, like randomly generated levels/characters, or it could be a main menu option that just shuffles the content of a base game, like how Pokemon randomizers change what you find on each route and where all the TMs are. (I personally think the latter is a very basic feature that hasn't been explored enough and can seriously add to a game's replayability.)

Throwing some stuff in:

Theme: Returning - Whether to your hometown, a place you visited long ago, or just to a hub area.

Theme: Going up - A mountain? A tower? Into space? There's a few options, but either way you're climbing.

Theme: Gaiden Game - Do a side story! If it's to someone else's thing, make sure to ask before doing so.

Theme: Hans Stinkman Revisited - I didn't end up producing anything for this, but that doesn't have to stop you! Choose a prompt from the contest [link: https://www.slimesalad.com/forum/viewtopic.php?t=6473] and go on from there.

Theme: There are just way too many doors here - I can't think of a real description for this.

Gimmick: MisÃ¨re/Karoshi - Losing is the only way to win!

Gimmick: Limited Use - You know the SaGa games, where everything has durability and once it's done, it's done? Maybe like that.

Gimmick: Sideview - Don't even need to script gravity or anything: just show things from a different perspective than the norm. https://twitter.com/ffeenixcks