What would be the best way to implement a hard mode?

What would be the best way to implement a hard mode?

I would like to add a hard mode to my game, all it has to do is make you fight the same enemies, but with higher stats.

I know I could just make a copy of every enemy in my game with better stats, and make change enemy formation sets when the hard mode tag is on, but I feel like their must be a better way to do this, as it would be very unorganized in my editor and a bit time consuming. dQw4w9WgXcQ

How did The Wobbler (who made Kaiju Big Battle, Walthros and much more) do that? He made very sharp difficulty selections, that seem to affect everything: Prizes, Heros, Enemys...
Hopefully he reads this.

I used a difficulty selector that sets a global variable and a tag which determines which formation players fight when they encounter an enemy.

Easy mode has the added bonus of a script that restores hero HP after battle. I do duplicate a couple enemies and change their stats, but for the most part it's just different formations and different chained skills for example: 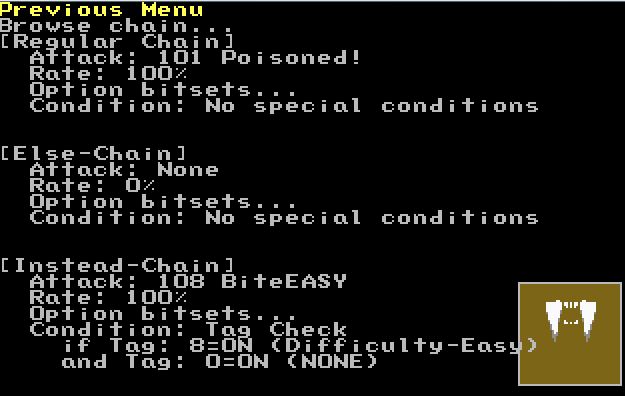 When an enemy uses the Bite attack, it chains to a poison attack normally. If the Easy Mode tag is on, it chains to a different version of the attack which does 20% less damage and doesn't poison. This allows me to use just one enemy but give them a variety of attacks available on different difficulties. I do a lot of things like giving enemies buffing/debuffing attacks on Normal and Hard but having Instead Chains replace them with straight damage attacks on Easy for players that don't want to deal with a more complex fight.

I also do things like adding invisible enemies that can't be targeted and die when alone as a way of giving players additional resources/XP in the Easy Mode formations. Super Walrus Land: Mouth Words Edition