Awesome. Was keen to hear how it went. Still feels crazy to see an OHRRPGCE game presented that professionally. Hope it was fun, not just hectic.

Also, I love the backdrop and sprites in that first screenshot you posted.

Well, Thanksgiving is not that far away! How long have you been working on the game now?

Yeah, I have a spreadsheet for specifically all the tasks for Soda to do at the pace we work, and it's a solid 7ish months more for him, probably another 1-2 weeks extra to be safe. I ideally want to be done long before Thanksgiving and just be doing quality control for over a month to really find everything.

We pitched the idea to the older brother in April 2017. For some reason I kept thinking we had done a full extra year of work, but it's still less than three years of production (narrowly). MTA was about 4. Surfasaurus was a hectic 1.

After this week I'll share something I did this past weekend when Soda gets me the final art for that scene, but it's a really cute scene where the Best Fairy Ever finds Axe Cop and joins the team as a summon ability. I wanted to make her a whole new character but the further and further into production, the less either of us want another character, so the compromise seems to be to still include her, but make her a summoned attack instead. I think comic fans will be happy to see her even if it's not a giant capacity.

I feel like in RPGs, it's super easy to overcrowd the playable character roster where people don't contribute enough to the plot besides just basic conversation. The game is Axe Cop's so it's okay that it does that more than in other games, but I still don't want to add another character in that has to be serviced narratively to just be cut off when their plot is done. This is the largest roster of dudes I've had in a game, about nine, and I'm probably not doing it perfect but I at least want the full team to feel valued as teammates to Axe Cop. Check out Red Triangle Games!
­TMC
Metal King Slime

Hmm, not very much leeway in the timetable!

Too many characters in an RPG is a pet peeve of mine, so it's good to hear you're keeping that in consideration. Honestly I have such a bad memory sometimes that I actually forget who my player characters are in a long RPG with a lot of characters! Especially if they were developed a bit many hours ago and then stopped talking. Feels like the source material and silly dialogue does make it harder to flesh out characters too, but... it's like you don't actually need to flesh out a character who doesn't even have a consistent form or name or personality anyway, and the goal is actually something else, maybe just being an actor in skits ... hmmm

Surlaw kept sharing his enemy logs with me and I thought... there's a ton of enemies in Axe Cop, why don't I have one of these? I didn't want to repeat what he did by any means, and I think his is great for world building, mine is moreso for learning about how to take down enemies. I think since Axe Cop is a game that can appeal to RPG gamers and non-RPG gamers, it's important that it be as accessible as possible, which is why you can't die in the game, but just go back to the last place you saved.

I haven't implemented it yet, but essentially, anytime you lose against a boss the enemy log will be updated with the boss information to hopefully make the second fight a little easier for the non-RPG crowd. Also at one point Axe Cop gets a cell phone and it was only used for the hub area to call Axe Cop for alerts on story missions. But fleshing it out with the ability to check bios, check move growth and now the enemy log will be great once I get that sorted out. Check out Red Triangle Games!

More games really should try to make enemy profiles more accessible. Everything about this is great. Place Obligatory Signature Here

For the third act, the heroes have to go back in time to the year 0,000,0 (Zero Thousand and Zero) to uncover truths about the world and the story. This was a lot of teamwork, myself with the sprites and the sprite spinning animations, TMC with the actual radius scripts, and then obviously Soda Piggy killed it with the backdrop animations. The longterm plan here is to make the inside of those black orbs the destination of where you're going, like Turtles in Time did.

A lot of people have complained about this and I finally did it. After Mission 2 you meet Uni-Man who gives you a cellphone and it was really just for exposition. Then I thought... I could use this to show my cool new enemy log and the moves menu that people want to see so they can see in the field how to level up characters to unlock moves. This is the only area where real time and date will be utilized but it does help make the phone feel a bit more real. Check out Red Triangle Games!
­TMC
Metal King Slime

Really snazzy.
Does the phone report the correct local time when you timetravel??

TMC wrote:
Really snazzy.
Does the phone report the correct local time when you timetravel??


It really should like... glitch out shouldn't it? There's only three total time travel destinations, the present (current year), the year 0,000,0 and then "Viking Times." I'll totally update for that. Thanks dude. Check out Red Triangle Games!

Been a long time since I updated. I purposely skipped this stage before PAX because it is such a huge and daunting level. It's got a huge dungeon that has a ton of variety, spaceship docks, factory, mysterious lab, and more. It's huge and we might actually finish it by mid-May, which is awesome. Usually it takes 4+ months to finish a stage and this one will be done in 2.5.

I didn't do this with tiles entirely, that would have been a nightmare. I focused the camera to a static chunk of it and then used slices to do this effect. It was a ton of work but I still love it when I see it.

Updated the death animations to the new fade to white. This also shows how enemies die at these types of situations in the game. You have to turn on four reactors to power the floor switch in the image above and all fights are over a giant bridge with the clouds beneath so in all four, they fall to their deaths.

In the factory segment you learn that the Auber Empire has been manufacturing metals and machinery for other bad guys throughout the game, namely the giant bad guy prison in the previous mission.

Once you repair the floor you can get to the elevator which will take you to the mysterious lab and the boss room. 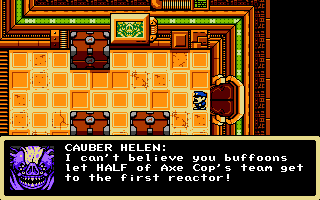 Finally, throughout the mission, the boss of the stage broadcasts to his men which adds more of a presence of him without needing to physically be in every scene. He's cooped up in his room controlling things safely away from you. Check out Red Triangle Games!

The fade to white is slightly out of place in the NES aesthetic... though the audience is largely unlikely to notice or care. Mega Tact v1.1
Super Penguin Chef
Wizard Blocks

Mogri wrote:
The fade to white is slightly out of place in the NES aesthetic... though the audience is largely unlikely to notice or care.


Believe it or not, of the two of us, Soda is the least strict on the NES rules. We use them as a baseline and more often than not just want to convey a vibe of the NES, so when sprites have more colors than normal, they're not off by that much and also look like it. I think most people will overlook the super specific rules, but yeah I agree with you. Check out Red Triangle Games! 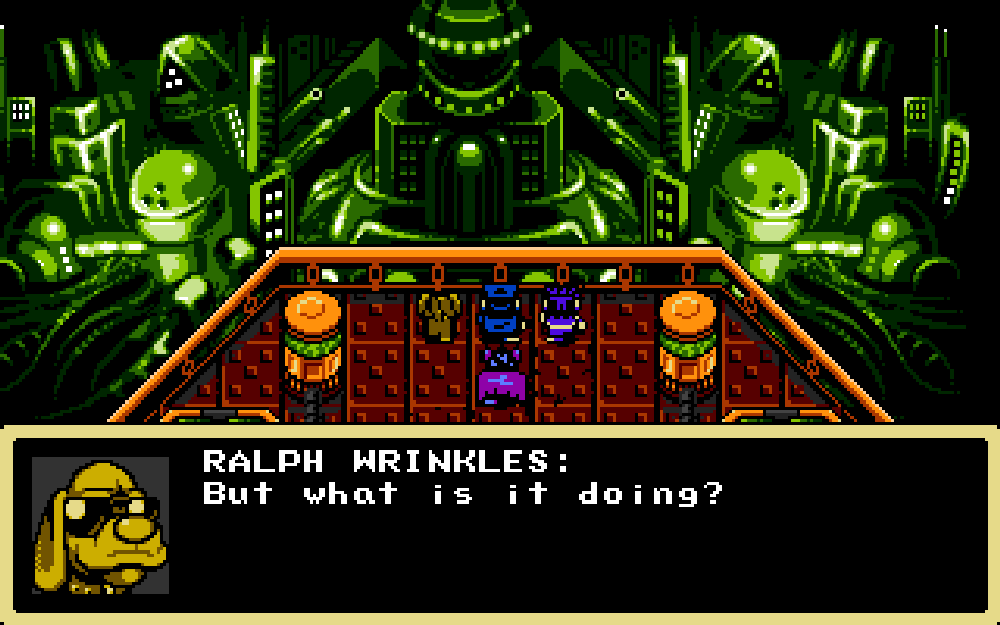 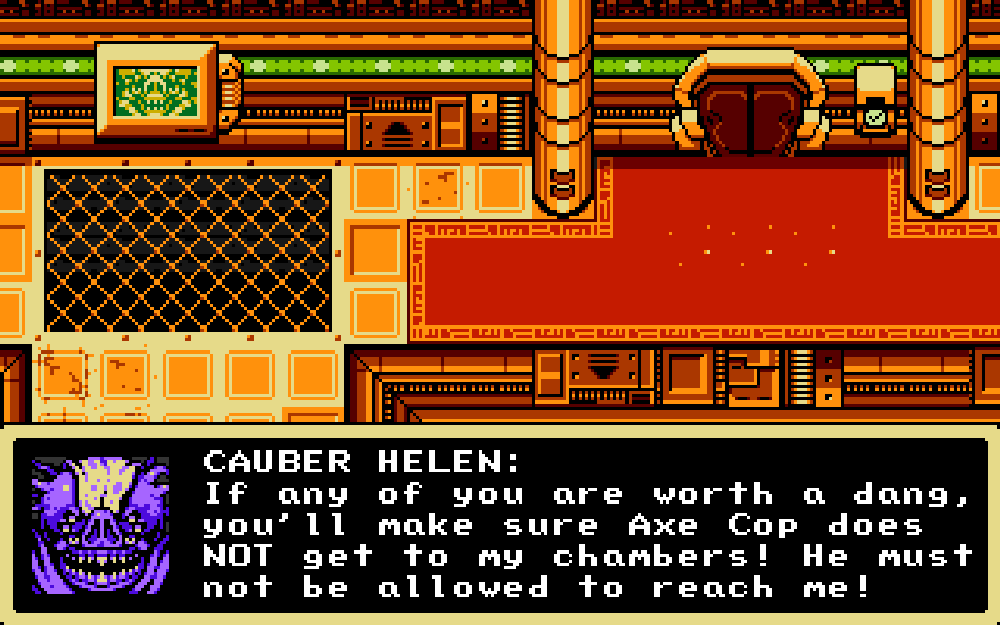 There's still a fair amount to do for this area, but I'm getting very near the end of it. I could even finish coding everything for it this week. This area is really significant to the plot of the game so we're going the extra mile to make it visually memorable, like the spaceship hangar, the fabrication facility, the Bat Warthog Man minigame, and even this spooky green engine far off in the distance.

Originally that machine was going to be where the player could walk up and touch it but it made the best sense for the scene to make it something the player couldn't and just let the sheer scale from far away sell how prominent it was to the facility. It was obviously handled by Soda Piggy and he knocked it out of the park big time. Check out Red Triangle Games! 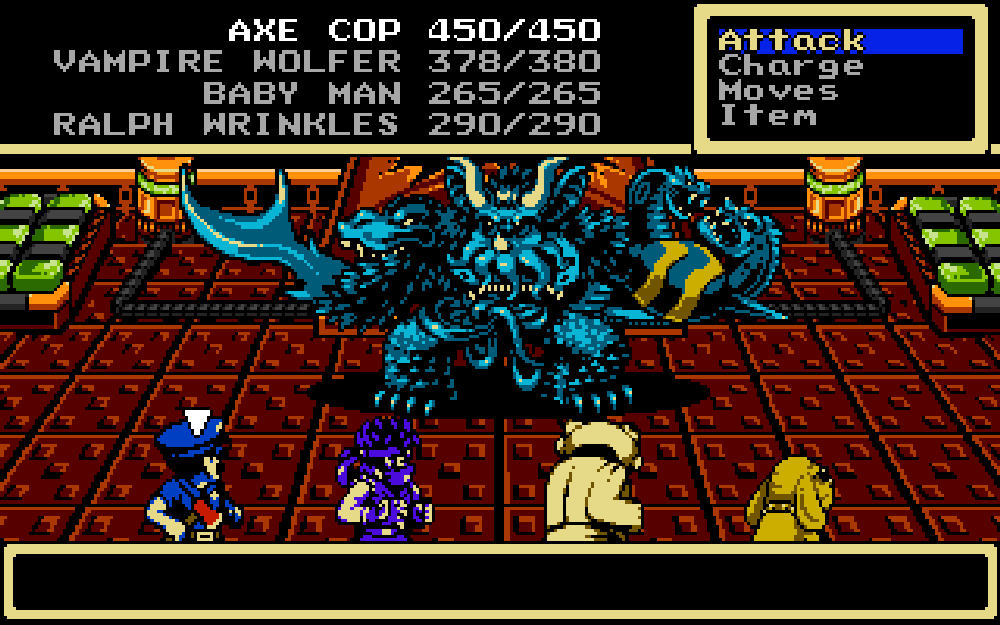 I finished production on the new mission earlier this week. I've just been working on battle balancing and debugging in general. Overall that part has been smoother than it usually is.

The picture here is one of our original monsters. There is going to be one more original creature design, the rest are designs from the comics. I feel proud of that. This one is inspired by the comics for sure. It's called a Badguymera, a chimera and a bad guy. We thought it was clever.

Anyways, in the comics there's a thing called an Every Man, a being composed of everything. The Badguymera is an incomplete version of that creature. This thing took Soda and I a couple weeks of discussion and a full week of back and forth sketching to get it just how it was in my head but he nailed it. Some nerdy backstory on my decisions for some of the components... When I was in the 5th grade I had a Beast Wars transformer that when he transformed he had a shark tail as an arm and I thought it was so bad ass. I actually reacquired that figure recently. My mom is deadly allergic to bees, so the deadly component to this design is the giant bee stinger. I'm terrified of snakes so we have a giant cobra wrapped around him, he and the eel actually bite down on the stinger to give it a poison or stun variation. The octopus tentacle mouth is a reference to Soda and mine's cancelled point and click adventure, Takoyaki Surprise 2.