TMC wrote:
That's strange. You didn't use the --no-native-kbd flag, did you?

You didn't attach anything.

Whoops, looks like we can't attach .TXT files to posts then. I'll send it over via email when I get home from work today. Only flag used was the input debug one.

Bob the Hamster wrote:
If I remember correctly, the stuck key bug on Linux with native keyboard enabled that prompted us to disable it there by default only happened after some focus changing-- switching from the ohr window to other windows, and back again. Perhaps this windows bug could be something similar?

The bug James saw on X11/Linux sounds a lot like this one. It was fixed in SDL 1.2's Mercurial in 2014, but there haven't been any new SDL 1.2 releases since 2013 and there won't be any more.
Unfortunately SDL 1.2 has been end-of-lifed for a while now, and many bugfixes which would apply to it only get added to SDL 2. We really need to move to SDL 2 for a whole host of reasons.

I love love LOVE the mouse support and the F9 menu!!!

So handy when testing scripts! Especially when one is holding a baby in one arm!

"One can never improve enough nor should one stop trying to improve."
­TMC
Metal King Slime

I remember a decade plus ago Komera asking for mouse support in the map editor for exactly that reason: it was impractical for her to work on her game with one hand. That request still motivates me to get around to it someday!

(But I'm not claiming it; James is welcome to work on the map editor if he wants to!)

In combination with reimporting scripts into the .rpg with F9, it's really useful to go to the in-game F5 Reloading menu while using Test Game and enabling auto-reload of scripts (meaning that game.exe reloads them from the .rpg). You'll see some annoying warnings about any scripts that are still running when scripts get reloaded.

When working on a game with a scripted main loop, I write it like this:

script, each tick, begin
# ... all the stuff happening each tick, which I might edit while I'm testing the game
end

This way only the skeletal 'mainloop' script keeps running, everything else can be reloaded if I edit it.

Sparoku wrote:
So handy when testing scripts! Especially when one is holding a baby in one arm! :v:


My little one's arms are long enough now to reach the keyboard, and she loooooves buttons.

I have to get a button-covered toy or a toy piano and put it on the table next to my laptop. Then she sits next to me and pretends to type :)

I've just discovered that if you save the game in a map with ${Hx} in it's name, the save file shows that ${Hx} number as the map name instead of the hero's name.

Ah! Thank you for reporting that!

I'm going to have to write a version of the hero name code expander that works with a save slot instead of using the currently loaded game.

I fixed that for tomorrow's nightly wip

All the ${} codes will work correctly in map names when displayed on the save/load screen.

I also added an optional argument to the "expand string" command so you can manually parse ${} codes using the data from other save slots instead of the currently running game state. 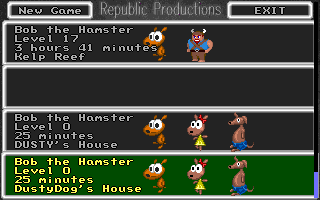 Fixed a critical bug that erased On-Death-Bequest attacks and Non-Elemental-Counterattacks from all enemies when a game was loaded into custom. If you lost enemy data, and you still have a backup copy of your game from before August 29 2017, please ask James for help here on the Forums. (this bug also affected nightly wip builds from 2017-08-29 thru 2017-09-21)

(That's only in nightlies, not Dwimmercrafty)

Yes, headings make so much difference! I'm currently drawing up a plan for reorganising the General Game Settings menu.
And I haven't heard any comments on the slight reordering of Custom's main menu. I want how many people's musle memory was offended by it (in particular the movement of Edit Slice Collections in my case). More changes may be coming. I think some things might be best moved out of the general settings menu.

I wanted to make the "Slice Type: X" setting the heading for all the slice-type specific options, but I didn't want to move it down the menu from the top, since it's typically the first thing you want to edit.

Bob the Hamster wrote:
Sparoku wrote:
So handy when testing scripts! Especially when one is holding a baby in one arm!

My little one's arms are long enough now to reach the keyboard, and she loooooves buttons.

I have to get a button-covered toy or a toy piano and put it on the table next to my laptop. Then she sits next to me and pretends to type

Aww!! How precious! "One can never improve enough nor should one stop trying to improve."