Infos
The alpha version of Dungeon Bout was released in 2016. It is made by Spoonweaver.
The readme nicely asks for feedback on the demo and the balancing. I would have liked to provide infos on balancing but I was not sure how to test for balancing issues.

Plot
Two parties fight over treasures on a battle field. This is a tactic game, rather than a game with plot and story and such.
How to play? In the beginning one chooses a set of figures. Each turn the players can move a unit on the board. The green area is for movement the red area is for attacking. Units have different movement and attacking ranges. A unit can attack another unit, the attacked one is then removed from the game. It's a bit like chess. The menu on the field is intuitive, a green o for confirm and a yellow x for about.
After the game, when a party has won, a victory scene is shown, with the figures dancing in a circle.
The game is meant to be played by 2 players. I tried to play against myself.

**Bravo! Great Design!** **Things that could be improved or added:** Overall Impression:
The game play idea is cool. It reminded me a bit of chess, maybe that's just because you move figures on a board. Unfortunately I can not say much about the balancing, I'm not good at board games and there is no real explanation what the characters/game tokens are supposed to be doing. Maybe some kind of unit-testing/computer-play-against-computer would be helpful for such games? I really don't know, but balancing such a game seems like a lot of work.
Anyhow, the game play idea is really cool.
The use of symbols (o and x) and colours make the game playable, even if you do not understand much English.
The graphics of the tokes are "blocky", like one zoomed to much at a tiny image. The good thing about this is, they could also work on a much smaller screen. (But they would look better, if they were less "blocky".) Also, more importantly they are all unique, so it is easy to tell what kind of unit they represent.
The sounds were a bit to long, same goes for the victory dance in the end. It should e possible to end the game easily.
The demo is missing some things (like a tutorial, play-against-computer-mode or a story mode with plot?), likely because it is just a demo.
Still, it shows potential and presents an idea about what the game play will be like. I'm looking forward to play the final version!

Re: Review for Dungeon Bout (Alpha)

marionline wrote:- if the game window is normal sized (not full screen) I can not move the mouse over the click the 2 Player VS - Button to click and start the game. This is a bug. In full screen mode it works fine.

That would be an engine bug, not a game bug. But I can't reproduce it. Could you descrie in more detail? Are you using Callipygous under Linux? What happens when you move the mouse cursor over the "2 player" button? Does the little sword cursor stop moving when it getshalfway down the window? Does the default operating system mouse cursor reappear?
Top 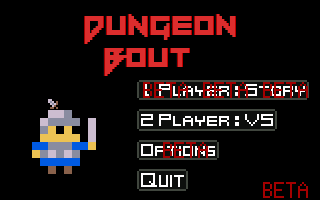 (Can't move the cursor down on the helmet...)
Top

OK. I saw in the other thread that you confirmed that you're using Linux. I'm really surprised; I haven't seen anything like this bug under Linux. What OHRRPGCE version are you using?
Last edited by TMC on Sun Jun 04, 2017 12:15 am, edited 2 times in total.
Top

I really enjoyed the review. Thank you a bunch marionline.
The cursor issue might have to do with how I use mouse controls. I could send you over the script if you think it might help tmc.
As for the things brought up in the review, I agree with basically all of them. The sounds are all mostly placeholders. Plans for the games story mode include a tutorial stage. That's one of the things holding up the game in fact. It's a lot of work to set up a tutorial stage. The computer's AI would be the main thing holding up the game's full release though.

Anyways, thank you again for your great review!
Top

I think this is likely a problem with SDL where something internal didn't update when the window resized. If Dungeon Bout used the mouseregion or putmouse commands then I would suspect that there is a problem with those, but it doesn't seem to. I also tried running the game with Callipygous+1.
Heh, today is the one-year anniversary of Callipygous+1, so I was momentarily confused by the version code.

I still hope this game gets finished. And creating an AI for Dungeon Bout still sounds like a fun project.
Top
Post Reply
7 posts • Page 1 of 1